The good news is that  this is not rocket science or brain surgery.  The right underwater dock light system will provide you with years of enjoyment and be essentially maintenance free.

This is likely one of the most controversial topics regarding lighting above or below water.  From flashlights to light bulbs,  companies often plaster their claimed lumen rating in an attempt to boost sales.  So what is a lumen?

The Lumens definition is: “a unit of luminous flux in the International System of Units, that is equal to the amount of light given out through a solid angle by a source of one candela intensity radiating equally in all directions”

Now that we understand what a lumen is, and why it is important, we can start to discuss the lumen claims that you’ll see when shopping for underwater dock lights, so let’s get started.

Undoubtedly you’ve been to several websites all claiming to have the brightest underwater dock light that money can buy.  The reality is that there is no “Super Light” and most bulbs of similar wattage produce a similar amount of light.  An easy way to spot a ridiculous claim is to simply ask the Google machine.  That’s right, if you paste “400 watt mercury vapor lumens” into the Google search bar it will show you results of bulbs that range from 21,000 – 24,000 lumens.  If you do the same search for “400 watt metal halide lumens” it will return results with a range of “32,000 – 36,000 lumens.  Before you buy an underwater light system from any company make sure that their claims are within these ranges.  If they aren’t, they may be exaggerating about the amount of light their underwater dock light systems produce.

Underwater dock light systems that use an uncovered bulb are the most common systems.  Odds are that if you’ve looked down in the water and seen a green light off of someone’s dock this is the type of system you were seeing.  These systems are usually powered by either Mercury Vapor or Metal Halide bulbs, although there are some unscrupulous companies passing off halogen and traditional incandescent bulbs to cut costs.  The reason these systems have become so wildly popular is that they are what is commonly referred to as “maintenance free”.  Put simply, underwater dock light systems that use either Metal Halide or Mercury Vapor bulbs over 175 watts produce enough heat when run nightly on a photocell, that they will burn off any underwater growth that has accumulated since the last cycle.  Our HID underwater dock light systems undergo a 3 step sealing and barnacle repellent process to ensure that not only the bulb, but the entire housing is treated to provide uninterrupted use for years.  These systems can be used in either fresh or salt water environments and consistently attract fish because of both the difference in temperature and the amount of light that is produced around the uncovered bulbs.  For more information on why fish are attracted to these lights, click here.

Despite the fact that LED’s or Light Emitting Diode systems are the newest technology available, they are not a good choice for a permanently installed underwater dock light system.  LED’s are more efficient and run cooler than other light sources with similar lumen ratings which is ideal for other applications, but they cannot “clean” themselves because insufficient heat is produced to clean the exterior of the light.  If you’ve ever left anything hanging down in the water off the end of your dock for over a week and then pulled it up you can get an idea of what will accumulate on the exterior of an LED system.  In saltwater especially, this is a concern because the prolonged exposure to the saltwater will eventually result in barnacle growth on the exterior of the light which will render it useless.  LED systems are an excellent alternative for temporary lighting off your boat, or even dock as long as you are willing to pull them in every week or so and clean off the exterior. 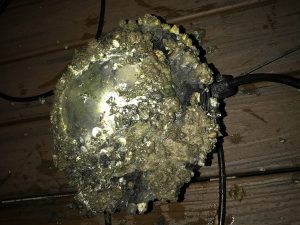 There are some manufacturers producing covered bulb dock light systems that encapsulate the HID light, and seeing the price tag on some of these systems is enough to send anyone into sticker shock.  Fortunately, this is another example of more expensive not meaning better.  Just as with the LED systems, placing the barrier between the bulb and the water creates problems because of 2 simple reasons.

The end result with these systems is a system that quickly begins to have a reduced output and appears dim within weeks of being deployed.  In addition, the cover will not necessarily protect your light.  The photo to the left came from a customer that purchased one of our light kits to replace their covered bulb setup.

Covers over HID and LED underwater dock lights do not necessarily protect them against the most common problem.  Boats.   And unless you are willing to pull in your light system every few weeks for a good cleaning, an exposed HID bulb system is your best choice. The most common danger to an exposed HID bulb is a boat propeller, and no cover on the market will protect a bulb against a prop.  By design HID bulbs are incredibly durable because they are meant to be deployed in commercial applications when at 175 watts and above.  If placed properly at the correct depth, we recommend at least 3-4 feet below the surface, and away from boat traffic, there is no reason to be concerned about your damage to your light.